A couple of weeks ago I gave you a sneak peek of baby blanket that I’ve been working on. This will be a gift for a friend of my other half who is expecting a baby. Now this particular friend just so happens to own a sheep farm and well, it’s no secret that I love sheep so when himself asked me to make something it was a no brainer.

When working personal projects I usually like to use a pattern and just enjoy knitting without all the trial and error of designing so off I scampered to the wonderful pattern library of Ravelry in search for a baby blanket with sheep on it. I soon came across a super cute pattern by Eileen Pearl, aptly called Sheep in a Field.

Unfortunately though I ran into a roadblock when I tried to purchase it as it turned out it wasn’t actually available as a download and shipping was from the US. Normally this wouldn’t have bothered me but time was a bit limited and I didn’t really have a week to wait around for the pattern to arrive. So with a heavy heart I returned to my Ravelry search but I couldn’t find a downloadable pattern I liked as much as this one so there was nothing else to do but to come up with my ow! field and put some sheep in it!

My search for a field began in my local yarn store Needles and Pins as I just so happened to have a gift voucher from there (my friends know me so well) and I found what I was looking for in Hayfield Baby Chunky in the adorably named colourway, Applebob.

I loved the wavy stitch pattern used in Eileen Pearl’s blanket so I scoured through my stitchionaries to find a stitch for my field. I found one quiet similar to the one used in Pearl’s blanket, it just didn’t have the right effect in the yarn I was using however I did find a very cool stitch in my Vogue Stitchionary called “Vertical Zig Zag” but instead of having them as vertical zig zags I wanted them horizontal so I decided to knit the blanket from side to side instead of top to bottom. So I cast on what I thought was (I’ll explain later!) the necessary number of stitches to give me the length I needed and off I went. I decided to stick with the moss stitch edge that Pearl featured in her blanket, it’s what I always use as an edging when sampling stitches or knitting gauge swatches and I liked the look of it.

And so the blanket grew….

And grew…and it was at about this point that I realised it was going to have to grow about 10″ more than I had originally intended. Remember how I said I cast on the amount of stitches I thought I’d need? Well turns out I was wrong by quite a considerable amount. Let’s just say I re-learned the importance of a proper gauge swatch! Although I did calculate to an extent, it was only on a sampler I made which had different stitch patterns on it and wasn’t blocked so obviously my stitches were much more scrunched up than I thought! I could have always frogged it and started again but I already had a lot knitted so on I went!

The cat even helped (or hindered!)

In the end I only needed to buy 1 extra ball of yarn. I thought I would need 5, I bought 6 as a precautionary measure but the added length meant that I ran out a few inches from the end. Above are a couple of photos of it being blocked. 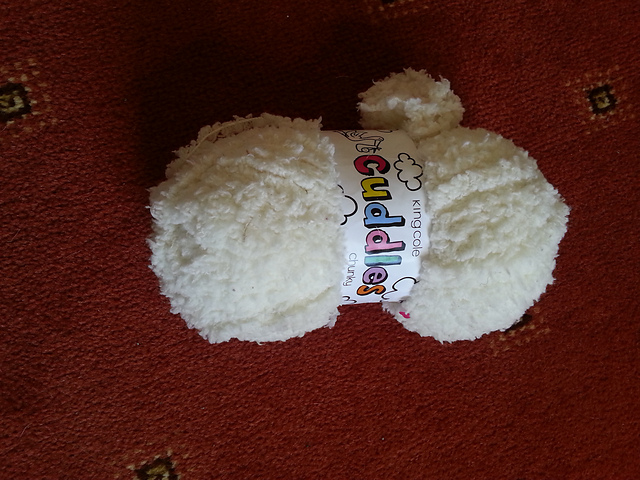 I did mention something about sheep right? I had an image of crochet sheep in my head but I also had an image of fluffy sheep. I just so happened to have some King Cole Cuddles Chunky in my stash. Now, it turns out this stuff is practically impossible to crochet with. I have seen crochet projects on Ravelry made out of this stuff and I have to a give a serious hat tip to those crocheters for not losing their mind while crocheting with this stuff! It is impossible to see the stitches so I soon abandoned the crochet hook and whipped out the needles again and with a few simple increases and decreases I had me a fluffy little cloud! There was no need to worry about what the increases or decreases would look like as he stitches are hidden under all that lovely soft fluff. Now we all know that sheep are really just clouds with legs (right!?), well I decided to go back to the crochet hook to make these as it’s just so much easier to make a nice looking oval with crochet than it is knitting and it just made sense to make his legs that way as well.

I had so much fun making these little fellas I decided to make a whole family 🙂 I have the patterns for them written out in my notebook so I’ll write them up here for you all for next weeks blog post!

So this is where I’m at right now, trying to work out where to place all my little sheep on their little field. I have a few more sheep to make up but hopefully (fingers crossed!) I’ll have it all done by next weekend. I’ll be sure to post some photos up here when it’s all done!